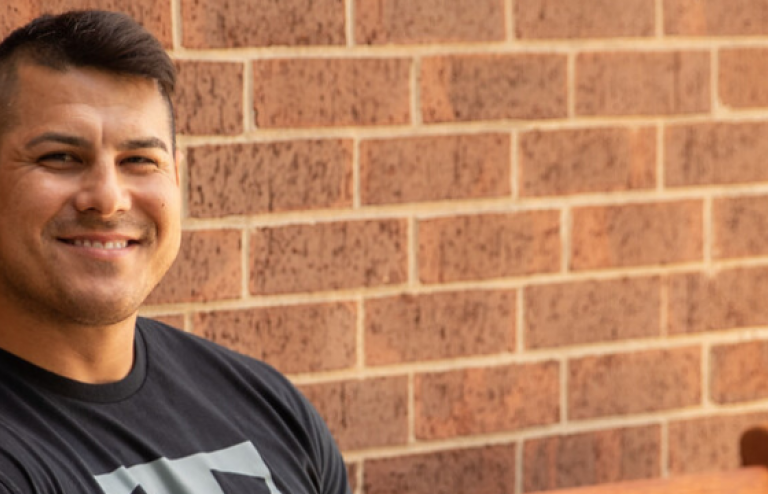 Many can attest to the old saying that “God moves in mysterious ways.” As Matthew Holata learned, sometimes that can even mean through the radio waves.

A native of Morris, Okla. in the eastern half of the state, Holata grew up as a competitive kid with a love of sports and teamwork. He planned to pursue the path of a student-athlete after graduating high school, but came up just short — literally.

“When it was time for graduation, I was a little on the tiny side to get a scholarship anywhere,” Holata said. “I had to figure out another way to get to college and pay for it.”

He joined the U.S. Army Reserve, an arrangement that would allow him to attend school full-time while participating in drill service and active duty training a few times a year. He began his first semester in 2003 and was deployed three weeks later, bringing his college career to a premature halt.

A year and a half later, Holata gave it another shot. He completed a semester this time, but received his orders to go to Germany before he could continue his education.

“It was as if every time I kept trying to pursue an education, life would intervene and I would end up getting orders from somewhere,” Holata said.

He completed several tours of duty for the U.S. Army and spent three and a half years in Iraq. By the time Holata had his boots back on American soil, he wondered if his dreams of obtaining a college education were permanently shelved.

“I had a wife, I had six kids, and at the time the focus for me shifted to raising my babies, being a dad and husband and providing for my family,” he said. “This was kinda put on the backburner for quite some time, until everything fell into place. I can honestly say it was no longer life intervening — it was God.”

As He often does, God revealed his plans to Holata in an unconventional way. After accepting a warehouse job at Tinker Air Force Base in Oklahoma City, he said he realized pretty quickly that operating forklifts and filling orders for sheet metal wasn’t his calling in life.

“It was mundane,” Holata recalled. “There was no interaction with anyone.”

The job paid the bills and offered great benefits for Holata and his family, but he said warehouse work left him feeling incomplete. The only thing to keep him company was the radio, which he kept tuned to the Christian radio network Air1.

“Every day, I was listening to the commercials, and MACU kept coming up over and over,” said Holata. It was a name he remembered some months later when he was let go from his job. Despite the severity of the situation, he described feeling an overwhelming sense of peace as he sat in the parking lot, praying for God to take the situation and guide him where he was meant to be.

As he sat there in his car, Holata’s cell phone rang. One of his friends had called him to tell him about a vocational rehabilitation program at the VA that would allow him to pursue his education full-time while replacing his lost income and supporting his family. He quickly applied for the program and was told he was the perfect candidate.

Not even five hours after losing his job, Holata was on the path to enroll in college and begin his degree program. And he said he knew exactly where to go next.

“I’d always heard that MACU’s programs were phenomenal for adult students. With six children, you can only be in so many places at once. When I inquired and my enrollment counselor told me it was one night a week, I just knew it was a God thing. Otherwise I would not be here.”

Holata, now a psychology major, began attending evening classes on the MACU campus. He said the support he’s received since day one has made it possible for him to succeed.

“I’ve attended other schools, and they put on this face of ‘We will help you achieve and succeed,’ but it’s mainly for their own benefit. It’s not like that at MACU,” Holata said.

“These guys call me and check on me. I’ve never felt support like this from any educational institute. During my first year, I was on the phone with my student support specialist at least once a week. She’s become a family member to me.”

He also appreciates the approach of taking one class at a time, which he said suits his learning style.

“My main difficulty coming from public education and military training was, it was always difficult for me to focus on multiple subjects at once,” Holata said.

After he graduates, Holata plans to pursue his master’s degree from MACU in counseling.

Eventually, he would like to work with individuals with trauma recovery.

“The impact that this place, these instructors and these people has made on me has already allowed me to impact people outside of here,” Holata said. “The military kept pulling me, but now that I’ve been at MACU, they haven’t messed with me much. I get it, I get it. I was supposed to be here in the first place.”