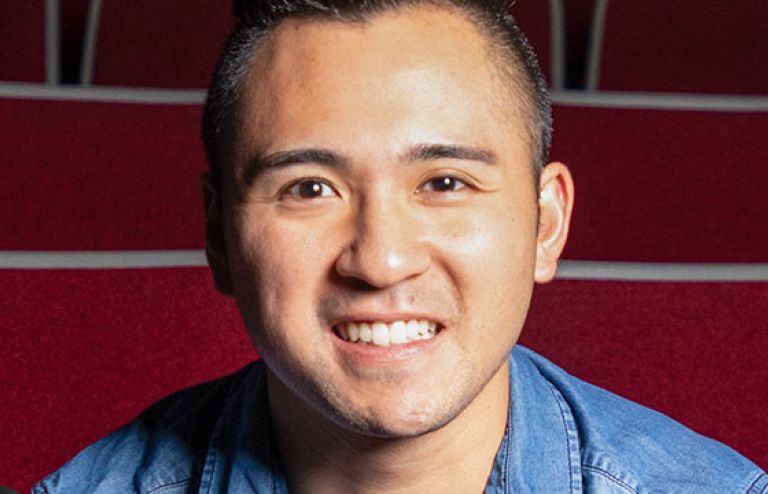 Music Major Uses God-Given Gift to Minister to Others

From the big screen to the chapel stage, Music and Ministry Worship major Kevin Dugay is used to drawing a crowd.

With his soulful voice and God-given gift for performance, Dugay frequently leads worship during MACU chapel services every Wednesday and Friday. But long before he found himself in Oklahoma City, Dugay was an accomplished young actor with 12 years of stage experience and a promising professional career ahead of him.

“I had been acting for most of my life,” he said. “I wouldn’t have given it up for anyone or anything. Not a person or a thing would have ever stopped me from continuing.”

While he was on the rising plane of success, Dugay didn’t have a place for God in his life. He was raised Catholic, but he became apathetic in his belief.

“I never really knew who Jesus was or what He did, what sins were or anything like that,” Dugay said.

That all started to change when he met an Oklahoma girl named Linda with a heart burning hot for Jesus Christ. Their friendship turned into a long distance relationship, and although Dugay remained respectful of his girlfriend’s beliefs, he still couldn’t hear the sound of God calling out to him — until one fateful day that remains vivid in his memory.

“I used to struggle with a lot of anxiety attacks,” Dugay recalled. “One time at work, I had a bad panic attack and went to the bathroom to try and calm myself down. Instead of shaking, my heart rate started to slow, and I felt this voice. I couldn’t hear it; it was in my chest. I didn’t believe in God then, but I still knew it was God. He asked, ‘Is this what I put you on earth for?’ in reference to me pursuing a music and acting career.”

In that moment, Dugay remembers images flooding his vision. He saw himself feeding the homeless, ministering to youth and singing in churches.

“All the sudden, in an instant, I understood that this is real. Jesus is real; God is real,” he said. “When I opened the door of the bathroom that day, it was like when Dorothy opened the door in ‘The Wizard of Oz’ and everything went from black and white to color. Everything in my life that I thought mattered didn’t matter anymore.”

“I wanted to do what He wanted me to do,” he said.

That started with moving to Oklahoma, where Dugay took up a youth worship leadership position in his girlfriend’s church. Today, he serves as a music minister while attending school full-time at MACU.

“My goal is now to use the gifts God gave me to glorify Him and to reach out to the people who are lost and broken and bring them to the family of Christ,” Dugay said. “I chose MACU so I could strengthen my theological background. I want to be able to minister to people effectively and be honest and truthful as I shepherd people with music.”

He said MACU’s Christ-centered environment has allowed him to become closer to God.

“I love the spiritual life on campus,” Dugay said. “There’s so many people on campus who I can just sit down with, and we can start talking about the Gospel and ask questions and find the answers together. Everyone here knows my name and treats me like family.”

As Dugay works to complete his degree, he said it’s not himself, but God, who he wants to keep in the limelight.

“I used to dream about being this famous actor and being popular and glorified,” he said. “But when Jesus got a hold of me, He really put a new dream in me, and that’s to use music to minister to as many people as I can. MACU has really been equipping me as a Christian and as a musician. I’m extremely thankful that this school is helping me obtain that dream.”