Preaching For A Decision: Interview With James Earl Massey

Read the Interview on Preaching.com 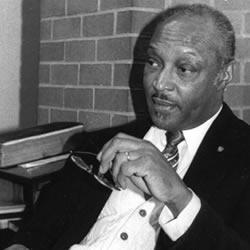 This interview first appeared in the September-October 1992 issue of Preaching.

For more than four decades, Dr. James Earl Massey captivated congregations and fellow preachers through his preaching and teaching. Before his passing, he served as dean of the School of Theology and professor of preaching and biblical studies at Anderson University. Massey first gained a national reputation as pastor of Detroit’s Metropolitan Church of God, a pulpit he held for 29 years.

Later, he served as International Radio Preacher for his denomination and as dean of the chapel at Alabama’s famed Tuskegee Institute. He was a charter member of Preaching‘s Board of Contributing Editors.

With an air of distinct graciousness and a voice of Christian conviction, Massey was an effective and faithful servant of the Word.

Preaching: How do you define Christian preaching?

Massey: Christian preaching is the kind of statement, based on New Testament teachings, which highlights the ministry of Jesus Christ in His relation to human need. Although I believe in sermons about God, which can broaden our understanding of our Creator and the One by whose providence life is ordered, I think the Christian note in preaching is different than the accent on God alone.

I make a distinction between preaching about God and preaching about Christ. I do believe that the preacher who takes God seriously must finally move to the New Testament teaching about God in Jesus Christ — even if only to understand how God has made Himself known through the Son, yet there are those who preach only about God and not about Jesus the Christ. Their understanding of Jesus as Son will have to wrestle with the whole New Testament notion of Jesus as Savior. Christian preaching has to deal with that soteric element in our Lord’s ministry.

Preaching: How do you view this as a problem in the contemporary church? Do you think that this is a particularly modern problem?

Massey: I do think this is a modern problem that is compounded by the increasing pluralism of our day. The whole notion of diversity as espoused in the seminaries has tended to level all religions in the mind of the average seminarian. Unless the professor distinctly deals with Christian particularities, the one who graduates from seminary will go out preaching religiously, but not Christianly, calling very little if any attention to Jesus in His salvific role.

This is one of the strong elements evangelicalism continues to insist upon. And it becomes a scandal in discussions between evangelicals and others. There are those who wish to leave matters of salvation to God and decline to deal with these from the pulpit, but the Christian preacher is under mandate from God to highlight the ministry of His Son.

Preaching: As you think of the sermon in this Christo-centric context, how does the message function within the Christian community to bear witness to Christ?

Massey: The sermon becomes, first of all, an invitational word to consider Christ. Secondly, the sermon becomes a means of expanding one’s understanding of Christ. Sometimes the understanding must come before a decision can be reached. The sermon becomes a tool for helping a person consider Christ in the New Testament witness, and then the sermon takes on a teaching function. According to the New Testament, the preacher must be a teaching minister. The preacher has to lead the congregation to understand the meaning of Christ for the whole of life and for the believer to see all of life in the light of Christ. This tool we call the sermon is an invitational means, but also a means for increasing our understanding.

Preaching: So the sermon should always place a decision before the congregation?

It is not only the preacher who must heed these implications but all those who hear the preacher’s voice. I might speak a word and lack the persuasiveness to help the person who heard me to follow through. But I must leave that in the hands of God—to send along someone else who might be able to bring that persuasion, to build upon the foundation I have made. I do not expect always to see everyone who hears me believe or accept this word, but at least I have done my part in getting them ready for this decision.

Preaching: How do you prepare your preaching? Beyond that, how do you teach your students to prepare for their preaching?

The actual manner of preparing the sermon is a different matter, but the manner of preaching must be centered in that union between the human need and God’s truth.

Preaching: Given that union between the text of Scripture and its message regarding human need, how do you move from the text to the sermon?

Massey: I place the text at one end of an ellipse, the human hearer at the other end of the ellipse, and between the two I try to focus on the dynamic which can help the hearer to understand the meaning of this for his or her life. The relation to the text in that kind of framework allows the text to open up as I see someone’s face, someone’s setting, situation, or need. The text opens up as I overhear what the Spirit of God is saying in that text—and throughout the whole of Scripture.

As Donald Gray Barnhouse used to say, the text should be a pivot, by which the whole of Scripture bears witness. Not that I pour all of Scripture into one text, but all of the Bible that I have learned is highlighted and feeds the meaning of a particular text.

Preaching: What is the greatest threat to genuine, authentic, biblical preaching in our own day?

The globalism concern of our time has opened us up to the reality of differences and to the function of those differences as valid and meaningful. But the Christian preacher must always be identified with and serve the Christian particularity. That relates also to the third threat. When we want to please the crowds, we too often fall into generalities and avoid particularities, and therefore do not ‘sound the note’ that we were called upon by God to keep before the public. There is a scandal of particularity to the Christian faith that is just germane to the faith itself and, apart from that, preaching has no quickening power to change human life.

You might deal religiously with any number of notions, and may even do so devotionally. We may be spellbinding in the pulpit by way of oratory and rhetoric, but the Christian has something more to say, and that is the kerygma. The kerygma takes us beyond generalities, beyond pluralism, beyond popularity, to reach to the very reason Jesus Christ came.

Preaching: With this issue of the kerygma, how does one confront the kerygmatic function of the sermon in each individual message?

Massey: This becomes a problem, because in the whole range of the pastor’s work, there will be times when we should deal with other important biblical concerns. That is why we pay close attention to the Christian year. Not every sermon will appear to be kerygmatic in the same sense, but all must be informed by the kerygma and by the realization that the kerygma must ultimately be served.

Massey: Yes, we certainly cannot escape the kerygma. It has to inform us always. For instance, in dealing with Psalm 139—that psalm is not explicitly Christo-centric, Christ is not explicitly mentioned—but it is theo-centric. Through that psalm, an individual has the opportunity to sense God’s nearness to us. Those verses speak of us as "fearfully and wonderfully made," known by God within the secrecy of the womb. But this passage ultimately speaks of the love extended to us by God through Jesus Christ.

All preaching gets us ready for Christ, or introduces us to Christ, or helps us to expand our understanding of Christ and relate more readily to Him.

Preaching: Who have been the primary models who have helped you to develop your understanding of preaching?

Massey: There were three main models. One was my father, George W. Massey Sr. My father influenced me because of his command of Scripture. He could quote Scripture at length—so well that if you quoted Scripture he could tell you where you were and join you in quoting it. So I learned from my father the importance of memorizing Scripture.

The second model was George Buttrick. He was a great stimulant at the level of outlining—learning how to let the Scripture unfold logically. He helped me to sense the mood in the text and then let the sermon be shaped by that mood. Buttrick also knew how to let the text shape the structure of the sermon, and serve the mood.

The third person who helped me was Howard Thurman, who modeled what I thought was an excellent devotional attitude toward God and toward the text as God’s Word to us, so that the preacher becomes a worshipper along with the rest of the congregation. The preacher should not just say something to the congregation, but should respond to that pressure brought to bear upon himself or herself in the presence of God in the context of worship.

Preaching: What do you see as the future of preaching, viewed in light of the students you see day by day?

Massey: I discern on the part of my students a strong interest in sensing how to share Christ’s Word with an aching generation. They are very much aware of the hunger of the human heart and of how little has really been done by a secular society to meet those needs.

Most of the students we now receive at the seminary are in their second careers. They are generally older than previous students; most are working, some have several degrees already. When they come to us, life has already prepared them to grapple with human need—much more so than the younger seminarians. The typical student of years ago came to seminary with a need to find out who they were. Today’s student is more likely to have that settled, and so they have a strong sense of dedication to get about the business.

Preaching: You have taught and influenced thousands of preachers through your teaching, preaching, and writing. What is your word to your preaching colleagues — partners in the service of the Word?

Massey: Preaching as God intended it will never lose its power nor its reason for being. Human concern will shift with every generation, but God’s means of addressing human need will never change. So, to find out how God has moved in history and to be open to follow that path is to remain relevant. Outside of that path, there is no relevance, even if there is, for a time, attractiveness.

The only path of success in God’s eye is for us to follow what He has mandated for us to do. And that mandate, as spoken through His servant Paul, is to preach the Word, in season and out of season.